Words cannot express the amount of joy when I first started using YNAB. It felt leaps and decade better than old Mint which has not really been updated since a decade ago?

So… then YNAB TD Canada Trust importer broke around Feb/March of this year, not YNAB’s fault, I know. But the fact it was not able to connect my bank account for like three months while MINT can still do 3 days later after TD Canada interface update makes me wonder if YNAB should switch to a better bank connector?

That part… is not the worst.

So today after everything is finally back up (btw, I do have to pay for YNAB, and not Mint), three months later. I was happily synchronizing everything. When I realized that the bank balance are not correct... this is where shxt really hits the fans. As the core principle and competency of a finance/accounting software, the number one creed of its goal above and beyond everything is the get its shit together and get transactions imported/transferred correctly from the bank to the BEST of its abilities. Turned out YNAB only import ONE month back and even back then, some dates were offsetted by as far as 4 days.

If YNAB requires ME to manually cross validate every single transactions to rebalance the book vs bank record, we have a major problem here as not only is it making my life more difficult vs Mint, it is now forcing me to run a full investigation to see WHICH lines are not imported/date set properly! So far, rough comparisons suggest everything in March is pretty much gone.

A few quick comparisons: Note blue transactions are only there because of a LINK from those credit cards etc. 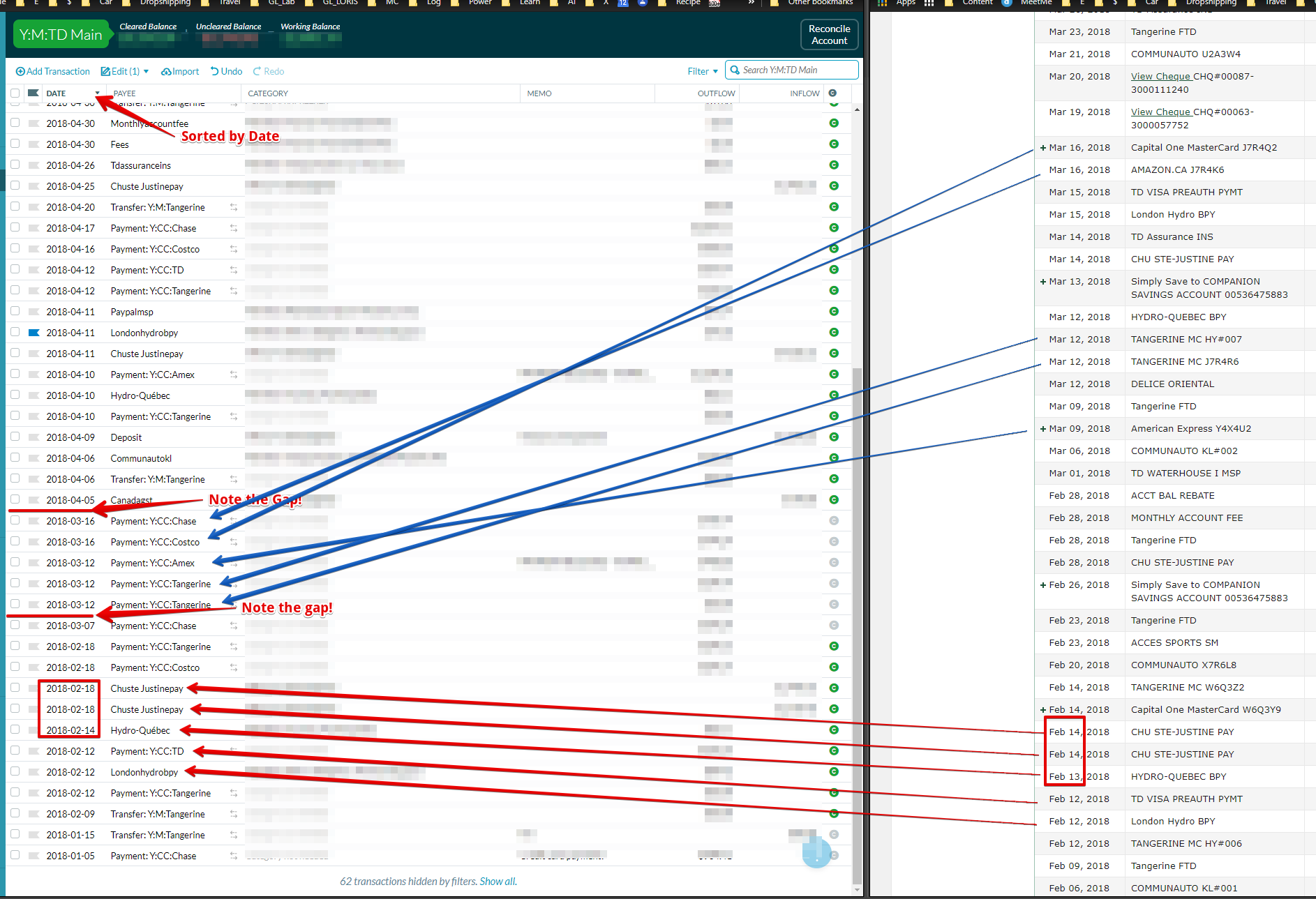 I will update again once I begin to sort through the mess.

Update 1: spent past 24h cleaning up the update. A few piece of good news: manual import of QBX format has auto deduplication built into it (at least for my main banking account) so that really helped out. I had to blank import past 6 months of statement to patch up the missing bits. My suspicion is that when missing import sometimes, the transactions gets neglected and will no longer be imported. i.e. completely fall off the book. =_=…. While doing this for another different account, I actually noticed that the deduplication process fails so resulted in crap tons of duplicated entries and causing issues…. again, more headaches. This requirement to manually hunt down when and how the out of sync occured really leaves terrible taste in my mouth as it fails at a basic level as I mentioned earlier: 1) if this software is PULLING data from the bank in the first place after I give it permission, it should not be requiring me to go over every single transactions again to en sure that they are synced over, that is not the job of the user, that is the job of the software. As a user of financial software, my goal and sole purpose of using YNAB or mint or the like is to do budgeting, tracking expenses, not questioning the authenticity of whether the copy from the bank over to the software occurred. If I want to do that, I could have used a spreadsheet…/rant.